Popigay rural settlement located on the banks of the same river in the north-east of Taimyr, almost on the border with Yakutia. This village belongs to the group of "northern bush" has its own special history. Day of its occurrence – May 31,1931. But the fact of the birth of the village happened at another point : It was founded about two hundred kilometers from the location of the modern Popigay upstream. From the district center of the village was located at a distance of 290 kilometers, if you count in the air and 700 kilometers-ah, if reached by water.

Relocation was not someone's whim or caprice: reasons for the village transfer they were of a serious nature. Firstly, due to transport problems circuit - despite the fact that it was located on a navigable river, however, it was in an inaccessible place for river vessels, which it was difficult and dangerous to reach village even at big water. Providing food and other necessities, it was not possible. And air transport has always been very expensive. Secondly, and most importantly - this is big water, the case during the spring snowmelt and ice drift, inflicted a crushing blow to the village literally wiping out coastal home. And those that were located away from the coast has always been flooded with water. Of course, many villagers were suddenly deprived of their property and the property of all, and those whose houses were partially flooded, a large proportion of the property fell into disrepair. To a greater or lesser extent, it happened every year.

Guidelines Khatanga region, it was decided to transfer village downstream river, where for several years on the high bank of the same river was purposefully building the future of the village. After another flood Old Popigay its residents were evacuated urgently to a new residence. "Great Migration" villagers happened in the early eighties of the last century and was not in the best event in the life of the villagers, and although everyone was clear this real need. Many took this as a real tragedy, and finally, some elderly people in general could not part with his native village, and stayed  to live out in the Old  Popigay as since then the villagers began to call his native village.

People can understand that it is difficult to permanently leave their homes, where "was born and was baptized", where he spent all your life. In addition, very favorable was the nature. Forest, rich in mushrooms, berries, and just - aesthetically pleasing beauty. It's hard to part with those benefits. I can not mention the events of the prehistoric ago. It is a very significant, interesting, and most unique feature of the location of the village. It is located on the territory of the famous Popigay basin or astrobleme, as it is called scientists, which translated from Greek means "star wound." Popigay astrobleme - a unique geological monument of nature, the most amazing asteroid crater on the planet. "Star wound"  Earth, after explosion fallen giant asteroid was more than a hundred kilometers in diameter and a half to two kilometers deep. According to research, the collision of two celestial bodies was about 35 million years ago. Popigay astrobleme It is the "youngest". Therefore, exposure of this relatively young asteroid crater is very attractive to scientists around the world. Russian scientists have gathered a rich collection of geological specimens, found in the valley, found valuable paleontological exhibits. The expedition that worked there, filmed movie. Often the conductors of scientists on the territory of the basin were locals. Among them Uksusnikov Constantine, worker FSI "Reserve" Taimyr ", born to the Popigay.

Recall one circumstance, the pride of not only residents Popigaya, but all of Taimyr: on the initiative of famous Novosibirsk scientist Sergey Vishnevsky Popigay astrobleme included in the UNESCO list of the geological heritage and is on a par with such famous sites of global importance, such as Yellowstone National Park, Colorado canyon or the Galapagos Islands.

Until now preserved scenery, showing the traces of the famous cosmic accident.

The generous nature of the southern part of the basin has led not only to emotional recovery, there are purely practical side of the coin. The fact that the hunting here has its own specifics, due to the presence of the forest. It requires special sledges, beams - smaller sizes able to maneuver between the trees. Unfettered expanses of tundra, where the new settlement, need quite different options for vehicles and housing. Others are the secrets and art of hunting. All this had to comprehend villagers Popigay in a new place. In a new place is another approach to the problem of fuel: If in the Old Popigay had the opportunity, if necessary, to use wood, abundance of fin for heating, here, in the treeless terrain, this is not possible, one hope for imported coal.

With of the moment the relocation it has been nearly 30 years. For the younger generation, present Popigaj - native village, and young people, of course, free from the pangs of nostalgia. In Old Popigay lived for a long time remaining residents, supported by relatives, geologists, members of other expeditions. 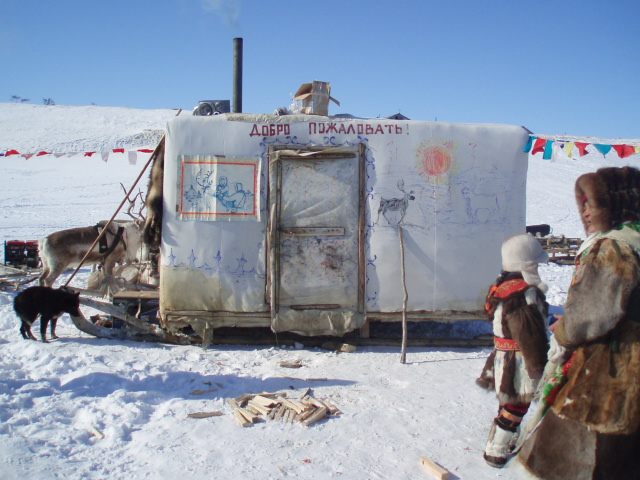 As regards the chronology of events, the first organ of the Soviet government in the village began in 1931 Popigay generic Council, renamed later in a nomadic. In 1935, the village had a population of 300 people, including 160 men and 140 women. The first farm bore Stalin's name and was formed in 1938, headed by Chairman Yegor Popov. At the end of 1961 the farm was renamed into kolkhoz XX !! (22) Congress of the CPSU. Leading industries – fur production and reindeer.

Home of the sixties is characterized by the development of active construction. In the village there are: the club with a library, a kindergarten, a sauna, a primary school, a small hospital, a power plant and houses.

In 1975, when the government decided on the reorganization of agriculture. Popigay separation farm "Arctic" was established on the basis of the collective farm. The central manor was in Syndassko. The main activity is reindeer. The names of fellow countrymen, collective and state employees ,included in the annals of the history of the village. This reindeer, awarded government awards Chuprin A.S. and Bolshakov S.N. foremost hunting Chuprin N.D, Zharkov N.M, Chuprin N.M .

Remember villagers, and fellow-soldiers. This Nikita Zharkov, who died in 1944, buried in Karelia; Alexei Popov, missing person; Athanasius Lacherman - returning from the war, worked as a district police officer in Norilsk, died in 1990. 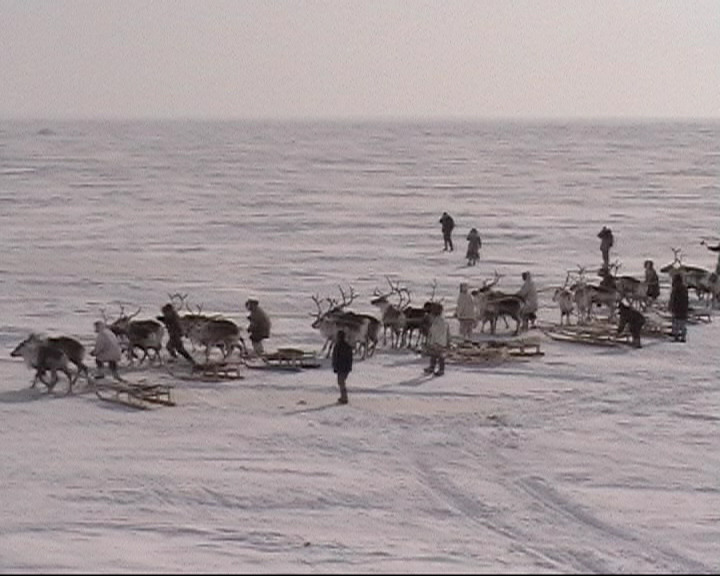 Modern Popigay remains one of the three reindeer village in the rural settlement Khatanga. It is not surprising that the Reindeer Herder's Day - the most important holiday of the villagers. The population of a little more than three hundred people, almost all - Dolgan. The village has all the necessary infrastructure, including DES, elementary school, FAP, KFOR, post office, shop. Most of the population is a traditional way of life, that is nomadic. Some are worked in the community "Popigay", created in 2003, others - in the cooperative "Tundra". All the sadness and joy, says the head of the territorial department of the village Kudryakova Lyubov, do not differ from the sorrows, joys and hopes of the inhabitants of other villages Dolgan. The main thing, she says, we live together, help each other - one of the principles Popigay villagers.