Kresty. When you hear the name of the village for the first time, you feel a little uncomfortable. With a very grim notion it is associated. But when confronted with it every day, and even more so if your own home – Kresty then you can hear it even music. The village has existed since April 1924, When by the decision of the Committee of the North opened factory State trade in the village Kresty. But the legend, passed from mouth to mouth, from generation to generation, indicating a more advanced age population. It is said that even in the eighteenth century by the cross “At the mouth of the Kheta” had the cabin Krestovskaya. which became a distant precursor of modern village Kresty. 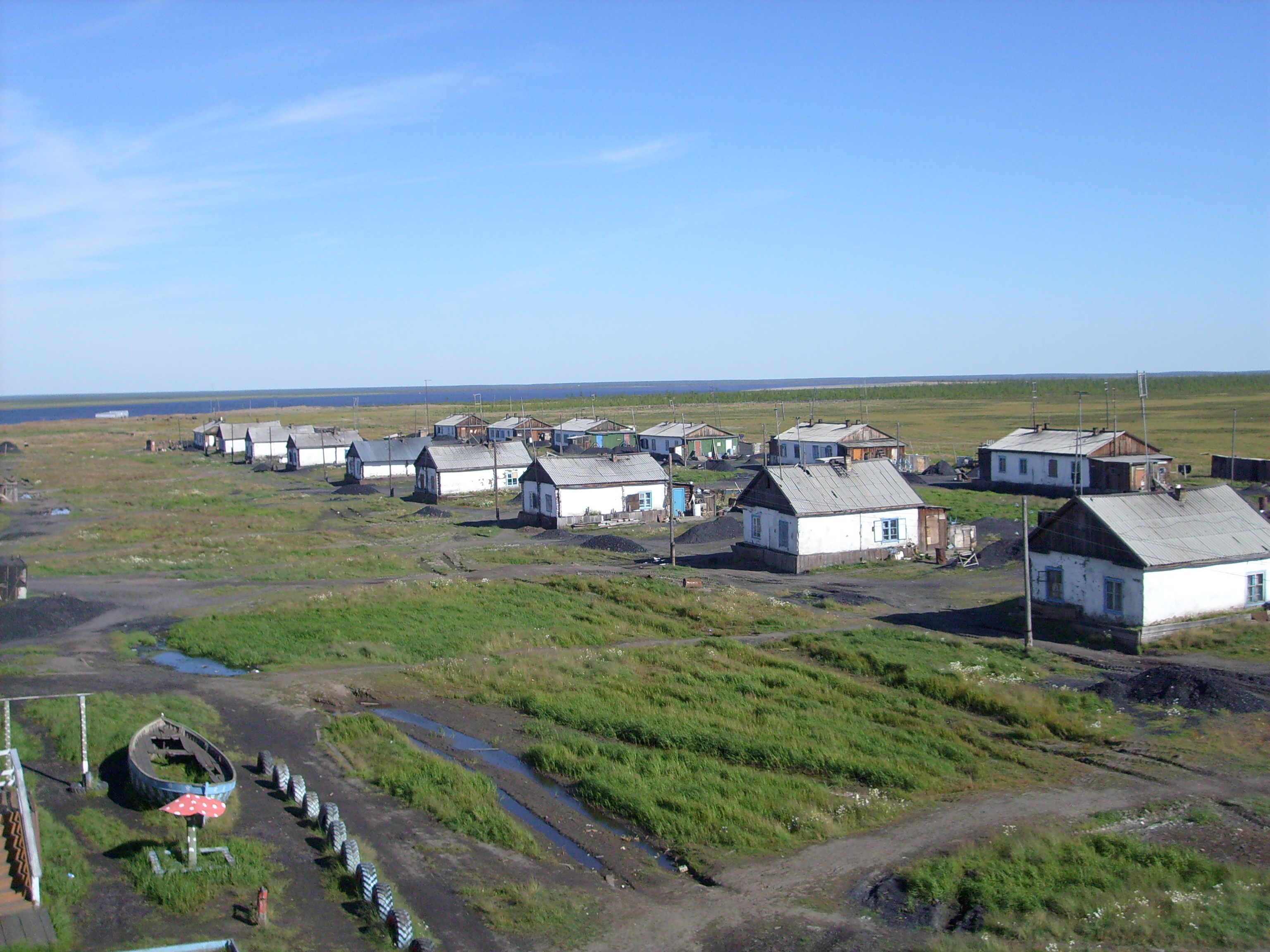 This modest village is closest, just twenty kilometers from the village of Khatanga upstream of the same river. More romantic place of location the village  is hard to find. Imagine a point on the globe, or conditional on the earth's surface, where it joins two large northern rivers - obstinate, with Putoransky mountain source Kotuj and low-speed obliging Kheta. Rivers do not flow into one another, they simply connect your streams. Point of contact of the rivers, gives birth the beginning of a powerful full-flowing river of East Taimyr - Khatanga. In fact, this is not the point, and very impressive extensive water area. In one version of a unique "Cross", formed the Triple Alliance of the rivers, the village owes its name. Connecting, rivers lose one shore and the other two far away recede from each other. So Khatanga river ,at its source - not a trickle, and full, formed river.

Slender streets with small houses lined up in a row on a high steep bank, visible from afar and fishermen, scurrying about in boats on the rivers, and drivers make their way through the winter road, and especially the pilots, guides his aircraft on the Khatanga airfield. The village serves as reference point for large riverboats, performing the role of honorary lighthouse. 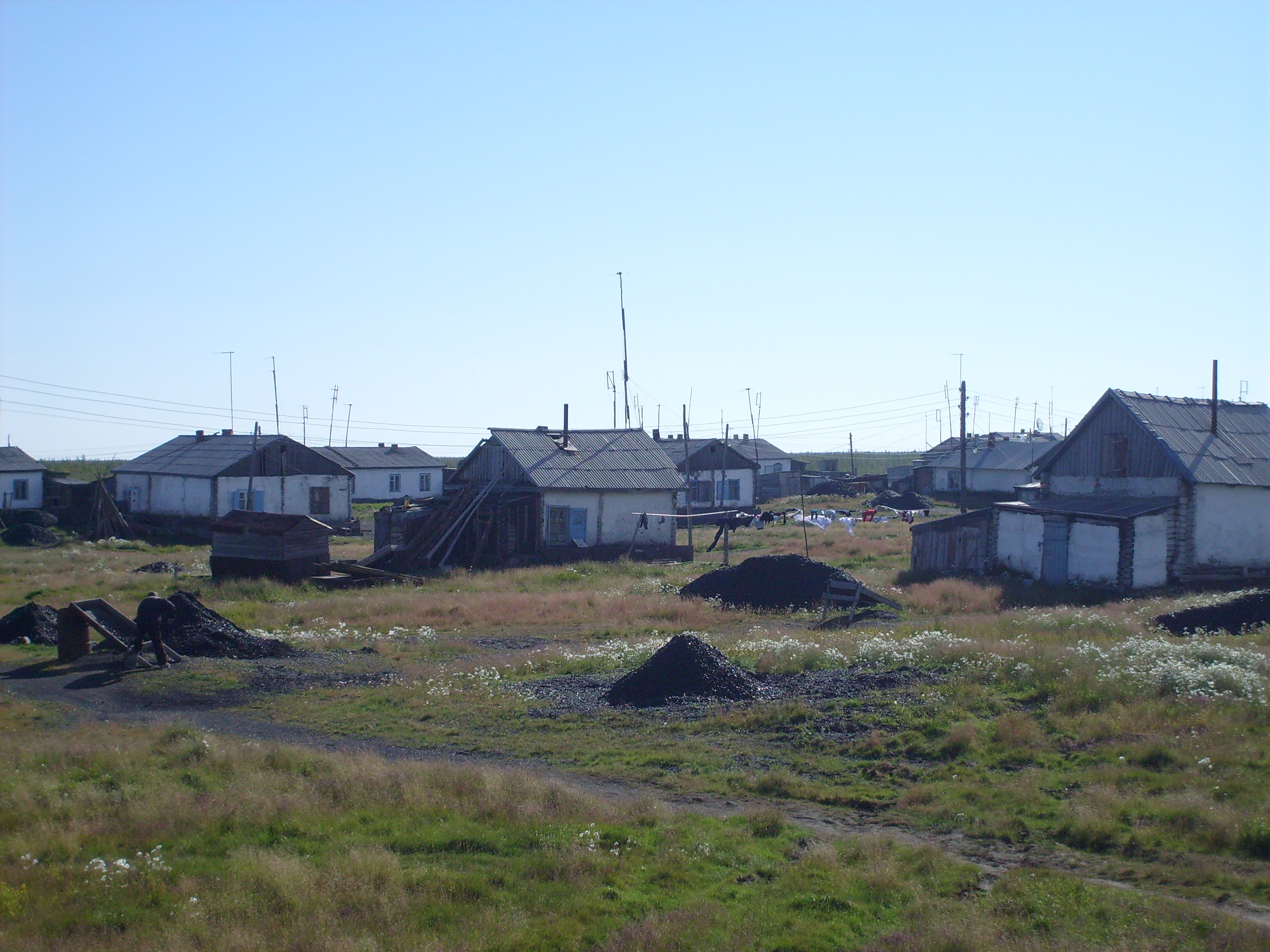 All patriotism and love for his village, villagers Kresty embodied in the album, prepared for the 85th anniversary village Kresty. The chronicle tells not only about the events, but transmit to future generations respect the names villagers Kresty. This is confirmed by the very title of the album - "No history without names." The development of the village in the Soviet and post-Soviet years occurred under the scheme, common to many villages. Collectivization, the struggle for the establishment of Soviet power, the first farm, the struggle for the universal elimination of illiteracy, war years, the Stalin collective farm, renamed over time in the collective farm "Victory", state farm "Soviet Taimyr" post-perestroika years - it's all the same Kresty.

The collectivization took place difficult to bloodshed. In 1932, was brutally murdered by the head factories state trading communist M.P Rogoza. Imprinted in the album and the name of the chairman of the first collective farm dated 1938 -  Mikhailov Mikhail Anufrievich, His successor from 1940 Yamkin Konstantin Mikhailovich. The war years, villagers Kresty worried hard, together with the Taimyr, with the entire country. Strict discipline, increased obligations production indicators, working in two shifts, malnutrition - all life is subordinated to slogan: "Everything for the front, everything - to win."

Villagers Kresty they saw off fellow to the front and waited for them back. This hunter-sniper Chuprin Konstantin Ivanovich. About him say that nature has given his watchful eye and keen sense of the hunter, northerly winds and frosts, tempered him. At the front him useful innate and acquired qualities, helped to perform the most important assignments. Awards are not given in vain. One of them - the Order of the Red Star, found the owner only in 1970.

As the villagers say, the village began to develop rapidly in the years after the war, having the status of a collective farm named after Stalin. Economic activities on the farm has been diversified : deer breeding, fishing, trade furs, animal breeding, breeding of animals in the cage. At the same time the number of reindeer was 12 thousand heads, fish catch - 1200 quintals a year.

The collective farm "Victory", in which it was eventually renamed already in the fifties of the last century was the title of a millionaire on the amount of income. In 1969, there were twenty-production teams on the farm : deer breeding, fishing, hunting and business, one farm for animals, numbering 120 animals blue arctic fox. There was also a farm for cows, which is not typical for the North. Despite the harsh climate of the Arctic, Cows in the amount of fifteen heads felt great. Presumably, due to the warm relations, pastoralists, attentive care and carefully harvested forage. In any case, was a lot of milk, it enough and children, and adults. Particular, production indicators created on the basis of the collective farm "Victory" farm "Soviet Taimyr".

The most important dignity village are people. Consistently over the past years restored the names of the leaders of the village, names of the best hunters, fishermen, reindeer herders, the best workers, associates in the field of education, culture, health care, workers in other areas. Each villager can look memorable album, on which pages found with the names of all the fellow countrymen who want to remember.

A special place in the grateful memory of the villagers took Falkova Christine Nikolaevna, still alive and living in Khatanga. She began working as cultural activities organizers red tent. In his career she rose, to the head of the farm "Soviet Taimyr" who successfully headed for many years. She It has a lot of rewards, including the title of "Honorary Citizen of Taimyr". She brought up eight children.

Kresty today there are only fifty-seven houses, residential and office. And its population – 330 peoples. As in all northern settlements, people here live as one family, each imbued with sorrows and joys neighbor. And everyone, if necessary, ready to come to the aid of fellow countryman. 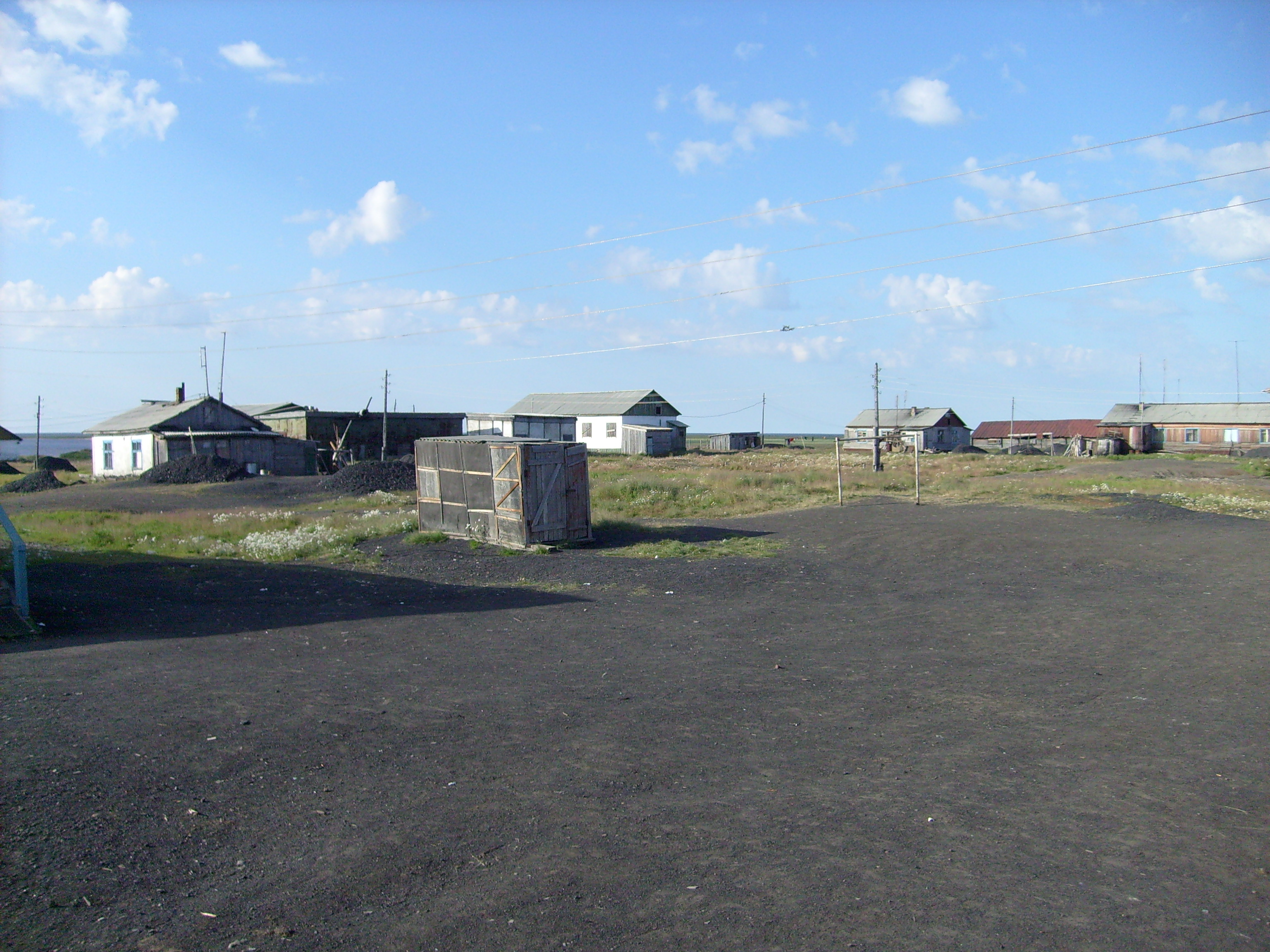 Naturally, as in the whole country over the past two decades, life has changed. From the former glory of the farm-millionaire was gone. Diversified economy, high production figures - a history to be proud of. For many years, people learn to live in the new market conditions. The employment problem - it is well known. Those who have a permanent job, working in the public sector, in the MUP "utilities". Part of the population are nomadic. Nomadic people engaged in traditional crafts - hunting, fishing. But the difficulties with sales market remains on the agenda.

The villagers are happy to remember the events of two years ago, when, half of the village worked as a team. Then actively proved himself public youth center “Erebil” (“Hope”) : guys have become parties to the regional program "Social Partnership for Development". According to the draft bulk of the work dealt with the repair of residential buildings. As noted by the head of the territorial department of Margarita Batagai, the initiative has picked up all the unemployed population, worked with great enthusiasm. All - and who worked, worked and for whom - were a real pleasure to participate in the project.

Especially happy pensioners, lonely, vulnerable villagers. Has been repaired, especially their housing. They also received assistance in screening coal (This is very important, because the village is heated in such a fuel, and sift it - not such an easy job). The boys brought the elderly pensioners drinking water. Features water supply - problem, as the village has no running water, so take water from the river and delivered to homes. 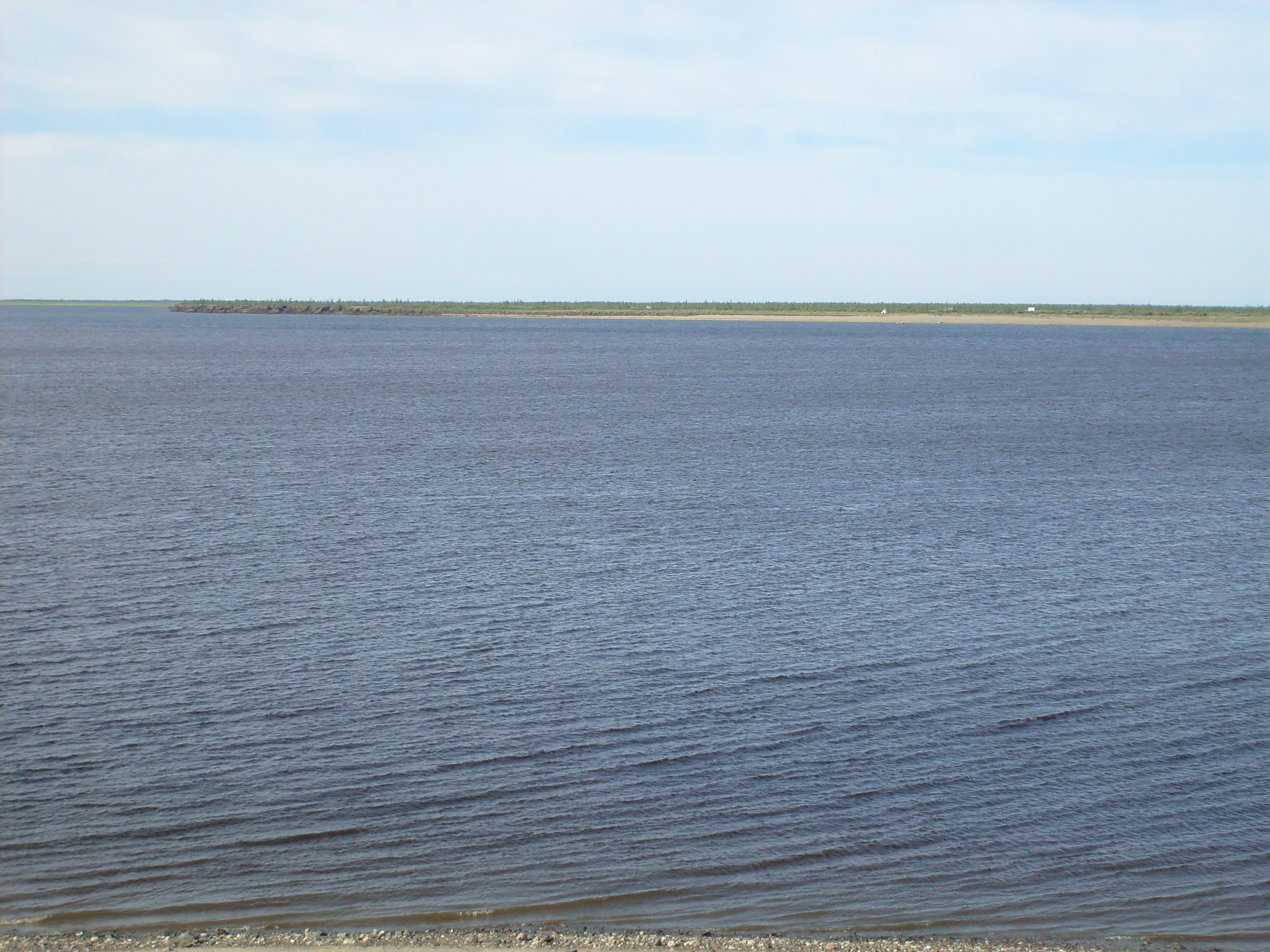 View of the river

Villagers living in the old housing stock dating back to Soviet times. And hope that the regional program, providing for the construction of housing in rural areas, will become a reality, and the village will update in the coming years. t should be noted that the shortage of housing in a residential area residents Kresty do not experience - enough for everyone. This is one of the few villages where not on the agenda of the housing problem.

All northern villages, they look alike. And yet they are different.

Proximity Kresty to Khatanga, administrative center is definitely affected. Not all the children know the native Dolgan language, says the head of the territorial department of the village Margarita Batagai, because the younger generation communicates primarily in Russian. Adults try to change the situation: live and Dolgan language and folk songs.

Traditional favorite classes Dolgan - sewing of clothing, footwear, art beadwork, manufacture of articles of fur is still very popular among women in Kresty, although not on the same scale as in white years. However, national traditions are not lost their importance, organically woven into contemporary designs life. There are still masters, impressing his original art. Special prestige and honor give fellow veterans art work – Fedoseeva Evdokia Egorovna and Molchanova Evdokia Innokentevna. But her skills and fantasies they are not inferior and embroiderers with less experience - Augusta Kozhevnikova, Batagai Maria, Natalia Mikhailova,Tamara Chardu and others.

Margarita Alekseevna sure that young people need to cultivate a love for their native language, culture, learning all the tricks of survival in the tundra. Young people can still learn from experienced people, directly under natural conditions. As recognized by the village head, her dream - to buy a herd of several hundred heads of deer and really interested youth, teach reindeer, with the acquisition of young people in the age-old experience of national activities.