"Solar Kheta." Exactly residents called their village, although it is not on the southernmost parallels territory of rural settlement Khatanga.  on the right bank of which the village is located. The name of the village gave the river of the same name. He was removed from the Khatanga 140 kilometers upstream Kheta. Place picturesque. The village is surrounded by the northern larch forest, like all Kheta his "relatives", ie villages southern bush. In forest undergrowth for the period of the short Arctic summer time to mature berry wealth - gift Northerners from a long, saturated light polar day. Berry period is very short. After each other mature cloudberry, blueberry, cowberry - favorite natural (In modern vocabulary urgent to say "clean") goodies northerners. During the harvest in forest, literally, "gardens" - generous, blue, alluring. Berry culinary semimanufactures - good support the long winter. Locations former farms or winter hut was chosen redcurrants, less - canker-rose. North land is rich mushrooms places. And how many medicinal herbs on the banks of rivers and lakes.

Officially Kheta counts his age since April 17, 1928, according to the recommendations of archival information. Most villages Khatanga region, including Kheta, formed as factories Gostorg in the late twenties. In this regard, and to determine the date of birth Kheta.

View of the Kheta

But in fact the same data archives can tell, Kheta wintering arose with the arrival of the first explorers to Taimyr. Of course, several hunting houses can not be considered a village. But villagers Kheta tend to believe that its historical roots lie somewhere in the seventeenth century.

In the thirties of the last century, when the active collectivization in Khatanga area, the population, was mainly, nomadic natural for him a way of life. Of course, collective education process was difficult. On the territory of factories in 1937 farm was established, was named Voroshilov. Villagers Kheta remember the name of the first chairman - it was Chardu Pyotr Vasilievich.

If you get in this southern from Khatanga. Not reaching ten kilometers to Kheta, on the right bank of the river can be seen two or three small houses (Now it is a hunting and fishing point) – Mutino. This is all that remains of the former collective farm named after Stalin, who in 1953 due to the small number worker, combined with the kolkhoz Voroshilov and renamed the farm "Precepts of Ilyich" subsequently (From 1980 to the transformation of perestroika) this - "Hetsky" farm. A mutinskie familys moved into Kheta together from their homes : them, constructed of sturdy wood northern larch, just moved to a new residence. 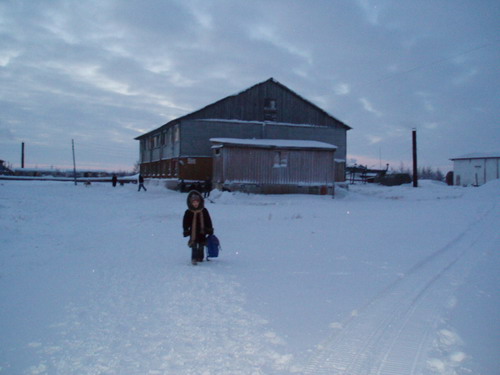 On the street Kheta

In those years, on the peninsula were organized kultbazy for indigenous peoples, task which is defined as the elimination of illiteracy, the preparation for the transition to a sedentary lifestyle, introduction to the elements of the culture and way of life, recovery of the nomadic population. Actively working activists in the "red tents", nomadic with herders. Since 1937 came “krasnochumovtsy” and in Kheta : taught children and adults to read and write, tell about life on "big ground", a great country, citizens which are, were northerners - Soviet Union, clarify the nature of the established power in the country.

The Great Patriotic War led him to the field of battle, fourteen volunteers from a small village, which became a single system of Soviet soldiers-defenders of the motherland. People of Taymyr fought near Moscow, participated in the defense of Stalingrad, in the liberation from the Nazis in Eastern Prussia and Poland. Not everyone returned to his native village. And those who have returned, one is no longer alive. Villagers faithfully, sincerely honor the memory of his fellow countrymen, as the veterans and home front workers.

And people rear difficult war years were given! In their memory, a colossal task fell on the shoulders of workers in the rear, and in the presence of war in the village were mainly female shoulders! Yes, teenagers and the elderly. The problem has been identified in the war years, the old-timers remember, need to increase the production of fish in the 12-14 times. Not enough salt, toils, cask. To remedy the lack of packaging, had to weave wicker rods weave traps- marezhi, and from the poles made box. Villagers Kheta remember the villagers who worked on the labor front, tirelessly: Maria Bettu, Bettu Tatiana, Naum Chardu, Timothy Aksenov, Nikolay Khristophorov and many others.

Must say that Kheta - surprisingly good village. It seems it all, every street, every house, every resident it radiates calmness, kindness, warm-heartedness. Villagers Kheta (They are currently about 380 people) they treat each other with great respect, participation, gratitude - to those from whom live close by and the memory of those who have gone. Names particularly respected countrymen, whose activities have multiplied the glory village Kheta, Immortalized in the names of township streets. Street Procopius Katygin owes its name to the first post-war collective farm chairman, who is remembered as an honest, fair leader and a wonderful person. Central street given name of Paul Chuprina, bright wise leader, state farm party organizer, of the "workaholic", patriot of his village. By the way, many years later, the baton of the village leader worthy took his daughter Chuprina August Pavlovna, which is currently the head of the territorial department of the village.

Kheta - one of the few villages that can boast of a comprehensive school. There is also a boarding school, where during the school year provides children from nearby villages – Novorybnaya and Katyryk. Professional team of teachers working in the school and the boarding school, teachers headed by the director of the school Chuprina Svetlana Afanasevnoj. During the summer, students boarding, wishing to relax outside Taimyr, get tickets to the camps, but in home expanse and beauty - many fabulous paintings promises polar day exotic nature of the Arctic!

In the village there is also a pre-school educational institution, in other words, a kindergarten and other necessary infrastructure: diesel power station, a small obstetric units, cultural center, library, post office. Some of the adult population is employed in these institutions. Some are engaged in fishing in the age-old field and fishing cooperatives. As well as work for individual entrepreneurs. 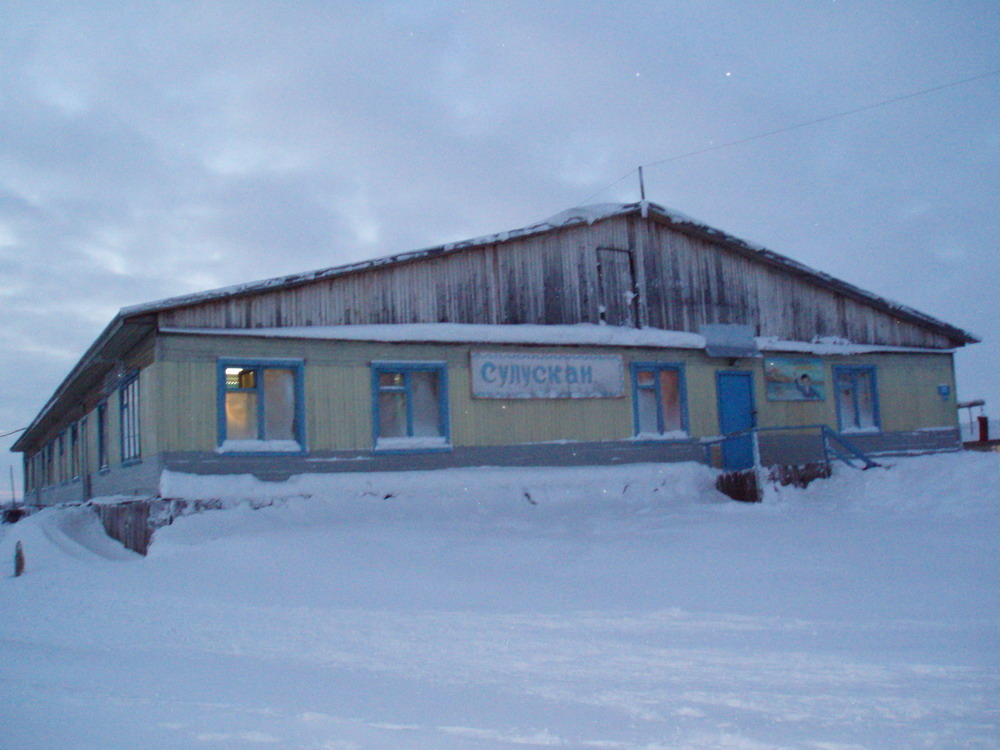 As said Augusta Pavlovna, villagers their problems do not fall out of the total family list KMNS. Like the other villages, Kheta heated by coal; uses the river water, which is delivered in barrels. Message to Khatanga and other villages - the river in the navigation period, the river is, only road in the winter and all year round - air transport.

Quiet and modest lives Kheta. With hope and faith in that there are common problems of township residents, which, though not referred to herein but terrific, sooner or later will be solved. 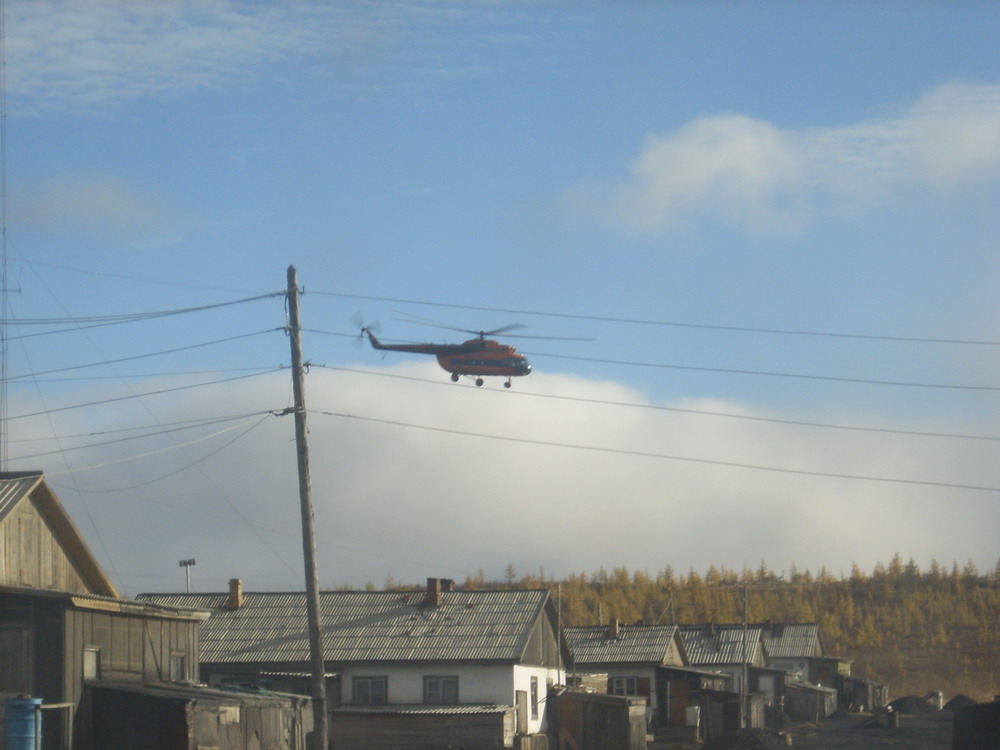 Photo by archive of the village and the author