As historians say, its birth Khatanga owes much Mangazeysky sea travel. Ostrog Mangazeya, built in the early seventeenth century on the Taz River, it became a stronghold of the movement of explorers to the east. In the eighteenth century, in the lower reaches of the river Khatanga, based groups Chariton Laptev and Semyon Chelyuskin, as evidenced by the entry on the monument in the center of Khatanga. According to archive data, date of birth Khatanga village and the date of accession Khatanga the edge to the  Russia is the year 1626, when  was created the first Russian village in form of state Yasachnaya wintering.

Historic Landmark village is Svyto-Bogoyavlenskiy, the world's northernmost Orthodox fane. He is the successor of the very first in the Taimyr Bogoyavlenskiy church, emerged on a high promontory at the turn of the seventeenth and eighteenth centuries - the start time of the adoption of Christianity by nomadic peoples that contributed to their ethnic and cultural rapprochement with the Russian. In 2010 this temple is celebrating its 305 th anniversary. 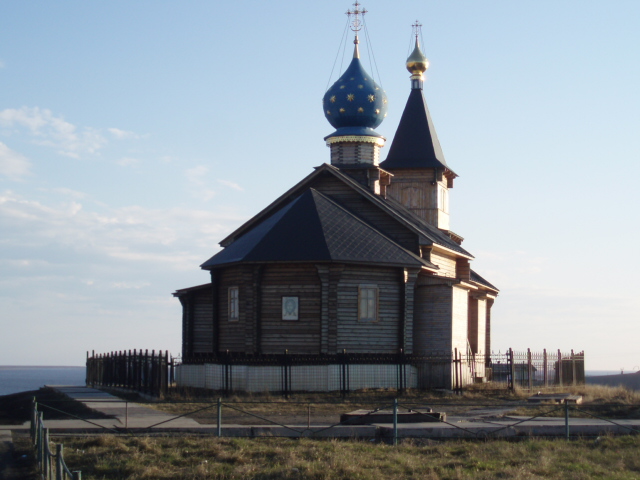 Khatanga itself - a small multi-national village with a population of about three and a half thousand people, mostly Dolgan, Russian, Ukrainians, as well as representatives of many other nations. In the other nine villages, a total population of roughly the same. This would seem a bit, but historically, that the most important in the life of Russia, Khatanga always occupied a unique place, It is the most important outpost on the northern borders of the country. She has always been and remains the capital of the eastern Taimyr.

Today Khatanga - the center of the rural settlements, completely well-appointed village with modern infrastructures. Each of the enterprises, institutions, has its glorious history of development. Apogee flourished in the years 60-80, when stabilized air service, has developed commercial shipping, earned geological expedition. Khatanga - a significant scientific and cultural and business center of East Taimyr. It held a unique biogeographical studies bring together scientists, not only Russia, but all over the world. 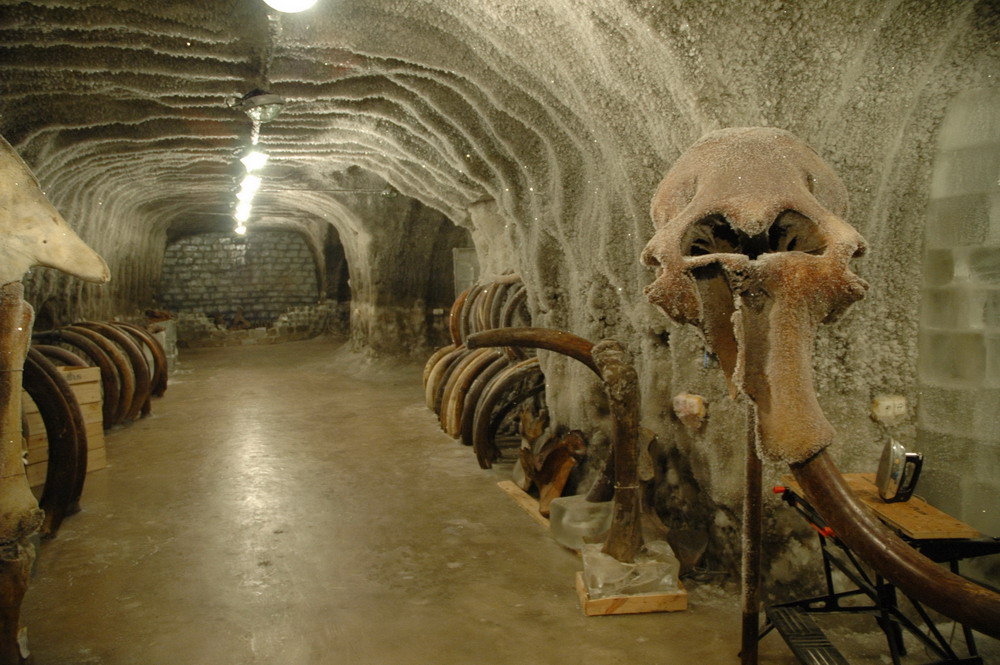 Research activities are undertaken by employees of the Taimyr Reserve. In Khatanga boasts several museums. Among them, the nature and ethnography museum, a literary museum Ogdo Aksenova, the unique cold Museum, equipped to a large ice cave. It contains unique rich collection of ancient bones and tusks of animals, including mammoths. For several years, collected the exhibits used by scientists from different countries for research. Khatanga - the main cultural center in the east of the peninsula. Powered two libraries, the House of Culture. In addition, a lot of work to preserve and promote the culture of the peoples of the North are Folk Art Center, the nature and ethnography museum, a music school. Famous for its creative ensembles "Chokurkan".

Khatanga always been a center for the development of agriculture as the population has long been engaged in aboriginal fisheries nomadic peoples of the North living here. This hunting, fishing, in Soviet times was developed reindeer and farming. Gradually nomads, become sedentary people. In Soviet times, worked successfully 9 state farms, the transformation of perestroika turned them into GOUSP. Currently, agriculture is represented artels and personal farms.

Khatanga to its historical gait, as well as district, region, country, experienced the heyday, and times are not the best for her.

In the years of perestroika, Khatanga also passed through many trials. But she withstood and survived. In this great achievement and population, and its leaders Fokin Nikolay Andreyevich, Porotov Sevostyan Nikolaevich, who devoted much effort to strengthen the region, being a few decades in senior positions. The potential of this land is inexhaustible. It should be noted that the administration of the region attaches great importance to the development of Khatanga settlement: proposed to develop a whole range of further development programs in the field of geology, agriculture, tourism and scientific research. Villagers Khatanga, as the head of the settlement, Sergei Zverev, the head of administration Natalia Klygina, confident that a great future in Khatanga - it is a reality. Let strengthened faith in gracious change, in good times and let it come to pass!

Khatanga can be of great interest for tourism, for its development. The village is already noticeable by their geographical location: takes place under the sun on the 72nd  degree of north latitude, far beyond the Arctic Circle, which causes the common phenomenon for the North: polar night with northern lights and frosts to 55 degrees, the polar day and white nights, with fascinating northern sky. According to the painters attending Khatanga such paint colors such space, the diagonal arrangement of clouds, such modulations of light can only be seen here. And feel the sky. It lives, breathes. Northern dawn, of the richness of colors has no equal. Color and tone of the state is changing so fast that a person is powerless before nature palette: it is impossible to remember and to portray.

In our northern "far away" a lot of amazing things. It is unique and attractive space itself Khatanga region. His greatness, virginity, inimitable exotic north. Truly it can be felt only here, in the vast expanses of tundra, not burdened with the consequences of industrial activity. In view of landscape and ecosystem diversity Khatanga region is promising for the development of tourism environmental, ethnographic, hunting and scientific and informative nature. It is home to endemic and amazing, rare birds and animals, in particular, charming red-breasted goose, mysterious musk ox, which ranked as the contemporaries of the mammoth. Widespread as in the foreign Arctic has got ski trips, snowmobile. They are episodic in nature. Khatanga occupies a special place in the implementation of  hikes on top of the Earth, showing a unique gate to the North Pole. 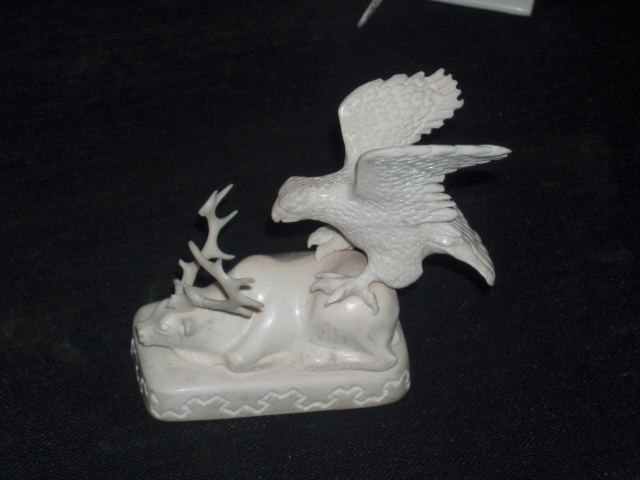 In the vastness of the tundra are working a variety of research expeditions. According to the materials of one of them and developed the above-mentioned cold Museum.

Nature gave Khatanga edge of another unique - famous Popigay astroblem, basin, located on its territory. Astrobleme relatively young, as the scientists say, her is only thirty-five million years. She is included in List of geological heritage the UNESCO.

Popigay crater, has no equal in the world. Being a very attractive target for international cooperation, this corner of the Earth has seen in his lifetime numerous expeditions and holds great promise as a research center, open and international scientific cooperation. A beautiful landscape of wildlife and socio-cognitive interest, will Popigay astroblems one of the most attractive sites for domestic and foreign tourism.

The uniqueness of Khatanga is not limited to natural boon. We have a lot of wonderful handmade objects. If anyone lucky enough to visit the Khatanga in the first half of the year, you can take the chance to see a unique building - the dam protects the ice, now unique in the world. At first glance, nothing special: a huge ice a box height of a three-story house, and thirty meters wide, with a slightly sloping side walls. Lying perpendicular to the coast, it is 230 meters in breadth river. From above- smooth snowy playground with frozen eight wooden pillars. The dam is being built annually since the late 30s. - from the time of formation of the river, and the agency is a reliable protection of vessels of the fleet during the devastating spring floating of ice. 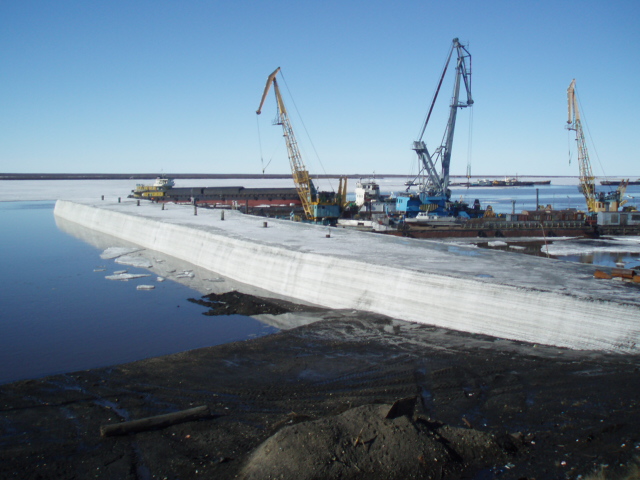 Technology dam construction  is distinctive, with a lot of professional secrets, it requires skill, experience, and most importantly - spiritual relations masters. Moreover, the work carried out in the most severe frosts: the stronger the frost, the reliable success. By March 31, the artificial iceberg ready, it blends harmoniously with the image of the coastal tout ensemble Khatanga, patiently waiting in the wings, which occurs in June. Sheltered behind the dam, "like a stone wall" the ships are in the cozy backwater, watching silently, “a fuss” the ice fields near deadpan obstacles. In summer, at one point breaking in impressive size ice blocks. Entrained powerful over river, they are making three hundred km journey to the Laptev Sea. Short Century dam active life, but it is enough to justify its purpose.

And, finally, how not to admire the world's northernmost Orthodox church, First Bogoyavlenskiy Church on the shores of the Khatanga arose at the turn of the seventeenth-eighteenth centuries. She became the northernmost and the first on the Taimyr Peninsula. Only the great river and remembers the exact date of his birth. The first mention of the church dates to 1705. The temple was the most revered building in the village and has served the people of 200 years. Since the inception of the temple in Khatanga service made hieromonks Turukhansk Svyato-Troickiy Monastery. Hieromonks passed more than a thousand kilometers of the heavy way, within a few weeks they come every year for Christmas, and remained there until Holy Easter, then in the same way, for another icebound rivers returned to their abode. In the late nineteenth century, the clergy began to be a permanent service. The second church was built in Khatanga in the early twentieth century, but has served only a few decades, at the end of the seventies was destroyed by atheists. Years passed. Difficult time the state changes, throwing, insecurity and demanded the release and spiritual support. At the initiative of the district administration head Nikolai Fokin in the early nineties it laid the foundation of a new church at the highest and most beautiful place on the river bank. Active construction was carried out at the beginning of this millennium. Renewed Svyato-Bogoyavlenskiy temple was a gift to us in the 375th anniversary of Khatanga. August 19, 2001 to the great feast of the Transfiguration of the Lord , he was consecrated, Eminence Archbishop of Krasnoyarsk and Yenisei Archbishop Anthony. This year, the temple is celebrating its 305 th anniversary.

Great everything, created here by their work people. Still, the main wealth of Khatanga - people. All these ingredients have formed an opinion of one of the foreign guests visiting our region. He said that, if Jesus come down from heaven to earth, the first place that he visits, will Khatanga. People, motherland of which - the Taimyr and those arrived for a short time, have found a second motherland here. Sincerity, warmth, hospitality for centuries inherent to northerners, were enduring values in our difficult days. And it distinguishes the people living here from the "mainland people", plunged into the harsh, uncompromising world of the market. Bathe after many months of hard employment in the conditions become the norm competition and hard relations in a simple warm atmosphere of goodwill and selflessness, relax your soul - it's not so little in our age of rapid technological progress and the inanimate computer technology.